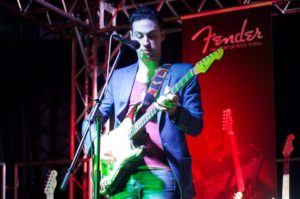 Attended the Fender roadshow held at Mars Music on 6 December 2017. The chance to see Dan Patlansky play and share his trade sectrets of playing a fender stratocaster was an opportunity I simply could not miss. He gave some input on technique which included hybrid picking but the most of his input was on how he gets his special tone. This was xtreamly useful and he also mentioned that we should pay particular attention to the hybrid picking technique of Robin Galalgher.

Robin Gallagher is a country style Tele player who can also play a wide range of style, was very pleasant surprise as I was not familiar with this Vape Town guitarist whos insight into the various Fenders on show was valuable and very interesting. His explanation and demosntrtion  of hybrid picking was a highlight of the evening for me. My friend and the bas player from BWH has been suggesting I try this technique and is something I will be investigating in the new year. 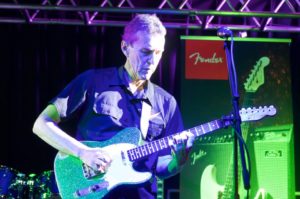 Fender’s build beautiful guitars for players at every level from magnificent instruments for the professional player who needs the best on stage, the the serious amateur and I love their enrty level guitars and packages which encourage people who want to get into playing to just get palying now.

At the roadshow were magnificent Fenders at every level, style and price range for every player. I could have gone home with two guitars. A custom shop Eric Clapton Startocaster, which would be my perfect guitar and the Hybrid Telecaset that thinks it is a Stratocaster.

Thankyou to Fender, Mars Music, Dan and Robin for an excellent evening of music and gear.

If you want more information I would check out the Fender gear at Mars Music and all fender players should join the Fender Family.